The origin of the Argyle name

This post is based on the very impressive researches of Roger Walters, a peerless expert on the life and times of the Argyle Football Club (1886 to 1903). Roger has a decades-long passion for the amateur club, and some of his countless discoveries help to explain a number of myths – stories that have for a long time been held true, but are almost certainly not.

Two such myths surround the origin of our club’s name. Interestingly, there is no official record of the reason for ‘Argyle’, either at the time or for the following 48 years. It is in the 1930s that stories emerged.

One such myth is that our club’s name originates from an admiration for the Argyll & Sutherland Highlanders’ football team, expressed in a letter by one of Argyle’s founders, Howard Grose, in the Western Morning News in 1934. Roger’s analysis demonstrates that Grose’s recollections were just as you would expect of someone nearly 50 years after an event, with many inaccuracies identified.

One of those mistakes is a reference to the impressive football played by the Argyll & Sutherland Highlanders Regiment in the Army Cup Final that year, and that was the reason why the founders chose the name. Yes, the Argylls did win the first Army Cup, but not until three years after Argyle’s formation. It was also said that the Regiment was based in Plymouth at that time, but that’s not true either. It was another Army unit, the 2nd Battalion South Staffordshire Regiment, who had been garrisoned in Plymouth 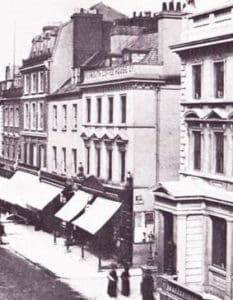 since March 1886 and whose general conduct had made them popular with the townsfolk. They had an impressive football team too, who made it to the very first final of the Army Cup in 1889. Against expectations, the South Staffs were beaten on the day by the Argyll & Sutherland Highlanders. This is no doubt the reason for the misconception created nearly 50 years later, even though the game was played three years after Argyle FC first took to the field.

Another myth is the alternative explanation, that the name came from the location of the founding meeting in Argyle Terrace, Mutley, or at the Argyle Tavern or Arms (neither of which existed). None of this is true – Argyle’s name was decided at a meeting at the Borough Arms Coffee Tavern (pictured) in Bedford Street in early September 1886.

Incidentally, the next time you walk through the ground floor of the House of Frazer (Dingles, as was), pause for thought on the south side of the escalators – this was the location of the Borough Arms.

All that said, there is perhaps an association with Argyle Terrace. Grose’s letter tells us that two words were suggested at the meeting, ‘Pickwick’ and ‘Argyle’, but the latter was chosen because of its ‘local application’. Argyle Terrace was built some four years before, at a time when Queen Victoria’s fascination for the Highlands of Scotland turned into a national interest known as ‘Highland Fever’ or ‘Tartanitis’. There are many examples of Argyle streets across the country, and indeed the far reaches of the British Empire, and it was also common for Plymouth’s many small football clubs to be named after a local street. Whilst there is no evidence that any of Argyle’s founding members lived in Argyle Terrace, some did live close by. This could be the meaning of ‘local application’.

For more, take a look at Greens on Screen’s History of Argyle