In a previously unpublished article, former Labour Party leader and Argyle director Michael Foot recalls some of his pre-war Argyle heroes  including Sammy Black.  The 2-1 victory at White Hart Lane on Christmas Day 1935 was a favourite memory of Michael’s, although Sammy Black in fact only scored once that day with the other Argyle goal scored by Arthur Eggleston.

The article is reproduced with thanks to former Argyle director Peter Jones.

You can hear more of Michael Foot’s Argyle memories on Greens on Screen.

Playing real football with their brains as well as muscles 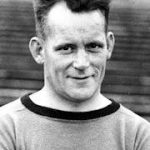 Sammy Black was always my hero Number One. There was no one to touch him.  Of course all of the others were Olympian gods – fleet-footed Mecuries or resourceful Jupiters. Sammy Black was the greatest of them all.  I shall never forget the first Christmas I spent in London.  I could not get home for Christmas Day and I was all alone in the great big city feeling very sorry for myself. But Argyle were playing at White Hart Lane on Christmas morning and, not having much faith in London Transport, I got up especially early. If my memory serves me right, Spurs were top or very near the top of the Second Division. Argyle were not many places behind. There was no real doubt about it from the first few minutes of the game. Sammy Black was at the peak of his form.  He scored two wonderful goals, one of them a brilliant solo run almost from the halfway line and the other a typical Sammy Black pile-driver from the kind of angle which never occurred to Euclid. Argyle got the two away points and I went back to a Christmas dinner all by myself in the Criterion Restaurant. Never, I can assure you, has turkey tasted more succulent. The stuffing too had a special flavour, something that the Criterion chef has not been able to re-capture.

At one time or another, I saw many of the great wingers at Highbury, Stamford Bridge and elsewhere. But Sammy Black on his day was more than a match for the Bastins and Alex Jacksons. When the ball was out of his range, he loafed up and down the wing as if bored to distraction. But of course he was just conserving his strength for those piercing invasions of the enemy’s lines, for those split seconds when he saw a chink in the goalkeeper’s armour. His shot with either foot was a good deal more deadly than Sir Francis Drake’s cannonballs. Sammy Black could have been and should have been capped for his country on numerous occasions. As it was, no Argyle match was ever lost finally whilst he was on the field. Incidentally, watching Argyle away from home can sometimes offer a special delight. Of course you risk a gloomy weekend, but when it comes off, how the pleasures of victory are multiplied. I have travelled to all the London grounds in this quest and further afield. Away from home there is a special obligation to make your presence felt to ensure that Argyle gets proper support and to ensure, most important of all, that the referee is left under no misapprehension about the myopic carelessness or downright bias with which he is discharging his duties. This may lead to differences of opinion with one’s neighbours. But it’s a free country, isn’t it – although you might not imagine so on some ugly occasions when I have been present at Craven Cottage.  I remember the regrettable scenes at Orient many seasons go when Argyle, by one of the great miscarriages of our time, lost 1-nil in the Cup.   A few weeks before, the match the most prominent of the Orient’s forwards had been transferred to the Arsenal. During the early part of the second half when matters weren’t going well and when on my estimate, a couple of the Argyle players had been impeded without any proper intervention from the referee I ventured the opinion that I could not understand why all of them had not been transferred to the Arsenal since, according to the legend, at that time, the Highbury authorities had a special taste for the what the sports writers call “robust footballers.”  This view did not commend itself to a Leyton Orient supporter on my left or an Arsenal supporter who happened to be on my right. It just goes to show that people in London don’t understand free speech as we do at Home Park.

Looking back on Home Park, it is difficult to disentangle one memory from another.   Think my Home park days started during those six agonising seasons when Argyle finished second in the Third Division each time. “They don’t want to go up” was the familiar gibe. I never believed it myself but as season followed season it almost began to look true.  Most agonising of all was the terrible day on almost the last match of the season when Swansea Town were battling with Argyle for promotion. Argyle only had to win at home against the old Welsh enemies to get the prize.  I think I had established my place in the enclosure behind the Peverel goal early in the morning, well fortified with homemade Cornish pasties. And then at the crucial moment Craig was un-sighted and the battle ended in a hopeless draw. Craig in is normal form, was one of those heroes. What excitement he produced during those few seasons when he was charged with taking Argyle’s penalties. I always half wanted to see him miss one (of course with Argyle well in the lead and those two points well in the locker) just to watch the scene which would have followed with him sprinting back to his own goal. But it never happened, at least on any occasion when I was there. Moses Russell, too, was then in his last great days.  What a cheer used to go up on a dirty, wet Saturday when for the first time he headed the ball and the splodge of mud would appear on that gleaming, revered, bald head.  Right to the end no  one played football with more zest than Moses Russell.  He really knew how to inspire a team. But of course Argyle had a great tradition of fine captains at left back.  Fred Titmuss and Jimmy Rae, after their different styles, were both classical exponents of the art.  Then there were some other favourites. Jack Leslie certainly showed what could be done with a footballing brain.  How much he and Sammy Black contributed to one another no one could ever disentangle. Jack Cock also in those two or three critical seasons gave a polish and dash to the forward line, which it just does you good to remember. On other of my special favourites, although he was not always in the first team was Frank Sloan. He rivalled the very best with the precision of his footwork and ball control. But, then, if you once start thinking of the names how the others crowd in – Raymond Bowden, Jack Vidler, Jackie Smith and a host more. None of these tributes to the giants of the past are meant as any reflection on the giants of the present. Since 1945 Argyle has had some great players – George Dews, Neil Dougall, Bill Short, Jack Chisholm and many more.  But when you look back over the whole record, I think it is interesting to note the names, which stick out most prominently.

For the most part, they are the people who played real football, who played with their brains as well as their muscles.  Argyle always had the tradition of playing good football and you can still hear it talked about by the crowds on many away grounds.