In the summer of 1922 the Argyle Board of Directors expressed concern that an impending recession would reduce attendances, especially because of the level of redundancies from the Dockyard, and decided to drop the first-team players’ wages by 18% to £8 a week during the season and £6 per week out of season, rates that remained unchanged until 1945. Because wages were so limited, benefit matches were very important to players and staff.

One such benefit match was for Manager Bob Jack who is one of the key figures in Argyle’s history.  Jack made 105 appearances for Argyle and played in the club’s first professional game in 1903, before being appointed player-manager in 1905-06.  He left at the end of the 1905-06 season, before returning to Argyle in 1910 and managing the club for another 28 years until 1938.

The opposition was Bolton Wanderers who sent their full first team which included Bob’s son David who Argyle sold to Bolton in 1920 for £3500. Bolton would go on to win the FA Cup  that season in the famous “White Horse Final” which was the first played at Wembley.

The match was played on 25th September 1922 and it was announced that silver cups would be presented to the winning team. Argyle, who were then in Division 3 South, were far too good for their First Division opponents and 14,000 fans saw them win the game 3-0 with goals from Bert Batten, Bob Jack and Jack Fowler.  At the end of the match the Argyle players received their silver cups and in addition both captains received a football.

The Archive is delighted to have Frank Richardson’s cup from that game which will soon be on display for fans to see. 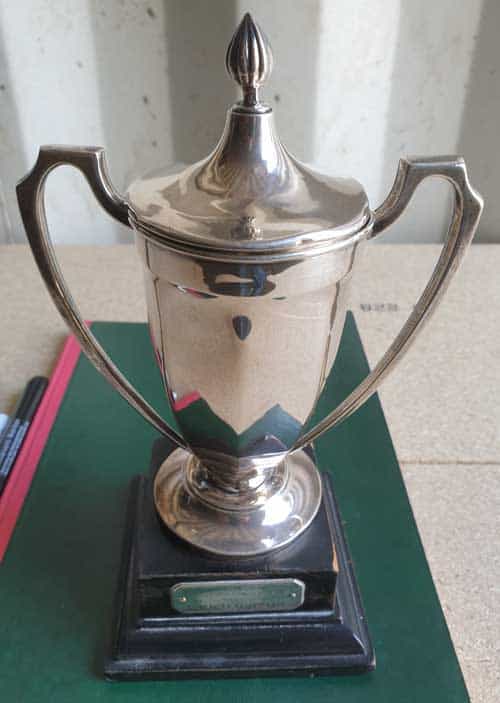 ARGYLE TOO CLEVER FOR THE VISITORS. WELL-DESERVED WIN.

Mr. Robert Jack, Plymouth Argyle’s secretary and manager, had every reason to be in a merry mood last evening, for his team had succeeded lowering the colours of the famous Bolton Wanderers, and he became the recipient of a splendid benefit in recognition of his long and sterling service to the club. There must have been quite 14,000 spectators at the match, and there was in addition generous subscription list. A noteworthy contribution was made the Bolton directors who accompanied the visiting team, and it is probable that this will cover the cost of Bolton’s sojourn in Plymouth.

The game was productive of scintillating football, and everyone must have been satisfied with what they saw. The Lancashire men undoubtedly showed the more polished methods, but the Pilgrims were more dashing, and proved far more effective in front goal. From the start the home side made it quite clear that their opponents did not possess all the talents. It was also evident all through that” both sides were eager to win the handsome silver cups which went to each member the winning team.

The Bolton side was captained by David Jack, who was given a rousing reception by his many admirers in the West, and another former player. Flood, together with. Pym, the old Exeter City goalie, appeared in the visiting ranks.

Argyle made two changes from the side which defeated Reading Jack and Batten taking the places of Bowler and Raymond at forward. From the start Argyle employed admirable methods, and swift movement from the left, in which Baker figured prominently, led the Bolton goal having a narrow escape. A smart header by Fowler took Pym by surprise, and it was with great difficulty that the goalie cleared. Soon it came Bolton’s turn to attack, and some delightful combination was shown by Butler and Jack, but their movements were nipped the bud by an alert defence. Generally the Argyle attacks were more progressive, and often the clever collaboration by Batten and Baker on the left wing won cheers from the crowd. It was a splendid move by this pair which enabled the Plymouth side to take the lead at the end of nine minutes’ play. A perfect centre by Baker was met by Batten at top speed, and with lightning-like rapidity the home inside left found the net with Pym well beaten.

Two minutes later there was prospect of another home score. Again it was the left wing which provided the opening, but Jack, left with only Pym beat, sent wide. Clever work Rowley, Jack, and Butler threatened to bring about an equalizer, but Craig was not to be beaten. A couple of  thrilling runs by Vizard and the spoiling work of Hill were features of the  subsequent play.

Chief danger to the home goal, however, usually came from the right wing. One the best movements in the game was shown Bolton at the end of half hour’s play. Deft footwork byButler and Jack had the home defence beaten, but Roberts’ shot struck the crossbar, and when the same player gathered it on the rebound he drove inches too high. Both Russell and Hill indulged in some long range shooting, and the latter’s effort came near increasing his side’s lead. Five minutes from halftime Argyle got a second goal, Corcoran following a clever feint centring for Jack score with a smart header. Argyle thus crossed over with lead of two goals, and had well earned it on the run play.

Bolton were the more aggressive side the second half, but they encountered a rock-like defence, and were seldom really dangerous. Their forwards brought all their cleverness into action, but the home defenders were always their masters. The Argyle halves, particularly Hill, shaped in convincing style, and behind them Forbes, and Craig did magnificent work. The Plymouth attacks in this half were of individual character, and more than once Batten came near scoring again. The closing stages were contested in semi-darkness and to the accompaniment of heavy rain. In the last minute Fowler crowned fine solo effort with a third goal, and Argyle won a splendid victory by three goals to nil. At the close of the game silver cups were presented to the winning team, and the respective captains each received a football.