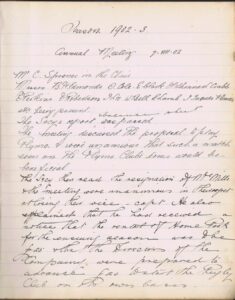 Before the formation of the modern professional Plymouth Argyle Football Club in 1903, The Argyle Athletic Club had many sections including Rugby.  The minute book covers the meetings of the Rugby Section in the 1902-03 season and is a fascinating insight to the running of the club.

We are very grateful to Paul Truscott for the loan of this item to scan for the PAHA collection and Roger Walters who is the expert authority on Argyle F.C. and Argyle Athletic Club who has written this excellent short history which brings the book to life.

Besides Association and Rugby football, there were sections for cricket, billiards, dancing, sailing and photography amongst others, all with their own committees. Many of the members belonged to more than one section. For instance, some of the Rugby players also played Association football for the Argyle Football Club.

For three seasons from 1900, the Argyle Rugby Club was very successful. They won the Devon Junior Cup in their very first season and awarded caps to their regular players.  The Club entered Senior Devon ranks for 1901-02. The vice-captain for that season was William Alonzo Mills who is mentioned on page 3 of the minutes as having left Argyle before the start of the 1902-03 season. He joined the (Devonport) Albion Football Club and was capped by England on 11 occasions 1906 to 1908, scoring 4 tries.

Read a scan of the minute book in the online library

All the meetings in this book would have taken place in the Argyle Athletic Rooms in the New Town Chambers at 80, Old Town Street which they moved into on the 1st April 1901. The rooms were quite sumptuous, financed and furnished by Clarence Newby Spooner and Spooner & Co. The members paid fees, but they were low and did not cover costs. The Argyle Athletic Club secretary, Francis Crouch, said many short-term residents of Plymouth enjoyed the facilities of the club but left the town before paying any membership fees.

On page 39, is reference to the club paying 10 shillings and 6 pence for new football boots for Frederick Dean. Sporting advertisements from the time show this was the price of the very best boots in 1902. Likewise, on page 21, it says that the rugby club bought 4 dozen Merino jerseys and 1 dozen serge pants. These were the most expensive materials, less likely to tear or bleed colour in the extreme conditions of a rugby match. Membership offered middle-class social conditions cheaply to all classes. A rarity of these times and in sport, thanks to Clarence Newby Spooner.

The ‘Minute book’ pages also show that Argyle rated themselves as a class above everyone else. On page 25 they tell the Devon Rugby Union that they do not want Mr. Judd to referee any of their matches. On page 61 the Argyle Rugby committee decide to have their own saloon for the railway journey to Barnstaple for the match on the 29th November 1902. Their attitude was not welcomed by football authorities in Rugby and Association, and Argyle’s plans to become a professional League club were not welcomed either by them or the other clubs of both football codes.

At the end of 1902 Argyle were finalising and implementing their plans to become a professional League Association Football club. Rugby became less important and there are complaints within the minutes that Home Park was not always being made available for rugby matches. Morale sank in the sport and players left for other clubs. The Argyle Reserves had a disastrous season and there is no evidence of any completed matches after the 3rd January 1903.

As you can see in the book the rugby minutes fizzle out. From this collapse many players moved to the Argaum Rugby Football club which still operating today. 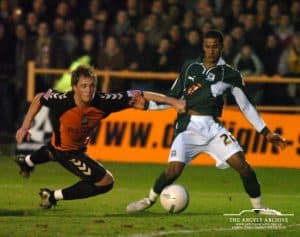 Match summary from Greens on Screen Facing the up-hill challenge in the first half, Argyle found it hard to settle and the fearless Bees gave 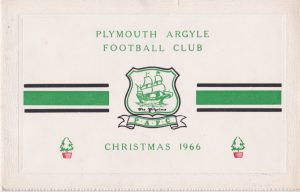 1966 Christmas Card The iconic 1960s shirt design was even used in the 1966 club Christmas card.  Click the button to see a scan of